MENA: Know When to Say No, Opposition Proceedings in the Region

Registering a trademark is the first step in the effective use of a brand, company, or product name. However, in order to safeguard and enforce valuable marks, brand owners must continuously monitor trademark publications to ensure that those potential trademarks do not infringe or potentially damage their existing rights.

Trademark watch plays a critical role in such early detection by monitoring and assessing all new trademark publications, especially in a multi-jurisdictional region such as the Middle East and North Africa. In the event any potential infringement is identified, the need for a swift opposition proceeding arises.

Oppositions in the Middle East and North Africa region run smoothly as they come in line with the underlying provisions of the trademark laws that are in place, as well as numerous treaty obligations, including the Paris convention filings and protection of unregistered well-known trademarks. Many jurisdictions in the region have transitioned from paper-based processes, and now adopted e-filing practices. It is worth noting that there is no unified regional opposition system in the MENA, given that each jurisdiction has its own Trademark Office.

Elements and Grounds of an Opposition

Oppositions are administrative proceedings in all counties in the region (except for Lebanon and Algeria) and are filed before the Trademark Office. Administrative proceedings are, in principle, less expensive than Court proceedings, and are based on written record with jurisdiction mostly limited to the issue of registrability. Being first-to-file countries, the applicant or the authority administering the opposition cannot require the opponent to provide proof of use of the earlier registered mark that is the basis of the opposition. In order to contest use, the applicant must initiate separate non-use cancellation proceedings. The opposition proceedings will not be interrupted pending the issuance of a decision in the cancellation action and vice versa.

Even if prior rights are not established locally, an opposition can still be filed based on fame. The extent to which a trademark is considered famous is usually determined according to the international standards for the protection of well-known trademarks (Article 6bis of the Paris Convention) as well as the local standards for well-known trademark protection. Any probative evidence will be accepted, and a determination will be based on the totality of the evidence, including such factors as (i) the duration and geographic extent of sales; (ii) sales figures; (iii) advertising figures and samples of advertising; (iv) awards, reviews and press reports; (v) the reputation of the mark within the relevant trade and consumer groups in the country; and (vi) expert testimony and surveys designed to assess the recognition of brand names.

The workflow platform in all countries does not eliminate the need for paper. There are still no electronic means for filing oppositions and for issuance of decisions except for Saudi Arabia and, most recently, the United Arab Emirates. Generally speaking, as the party bringing the case, the opponent is responsible for submitting a brief on the case. The applicant may file a brief or choose not to. If the applicant files a brief, the opponent will have the option to file a counter-statement. There are time frames and page limits associated with the filing of these briefs such the case is in Syria. Proceeding is only a written record with an oral hearing held only if requested by one of the parties. No new evidence can be introduced is an oral hearing is appointed. Oftentimes, the examining authority takes this time to ask questions about facts and arguments that were not clear in the parties’ briefs.

In all countries, withdrawal of an opposition with or without the agreement of the applicant or the opponent to the terms of the withdrawal automatically terminates the proceedings. However, in some countries, an official notification must be issued to that effect keeping the opposition proceedings as well as the opposed application pending for an unlimited time period.  The drawbacks of such a scenario is that opposed application could block the registration of a new application on relative grounds and no decision can be made pending the issuance of the official notification, as often the case is in Egypt.

Requests for extending an opposition are only possible in Jordan but approval is not granted automatically. Reasons for the request must be fully explained and considered acceptable. Extension is allowed only if the power of attorney, which is necessary at the time of filing the opposition, is not available. Anyone may oppose within the original three-month opposition period, but only those who obtain extensions of time to oppose may file during an extended opposition period.

The opposition period ranges between 60 to 90 days from publication date in almost all MENA countries. The map below summarizes what you need to know about opposition proceedings in the Middle East and North Africa. 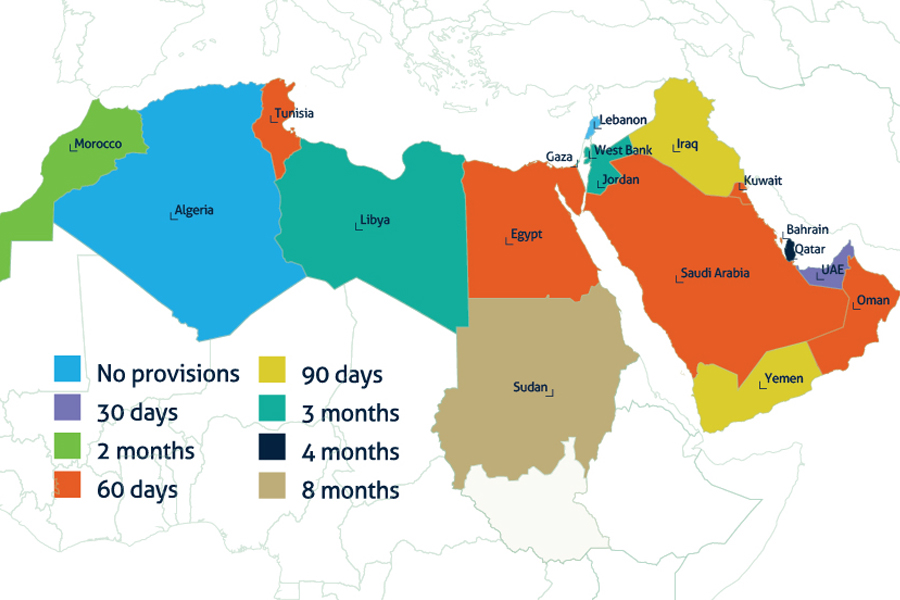 Should you have any questions, or require any additional information, please contact us at news@sabaip.com